In YouRENT, in order to have a precise view and history of the situation of all our tenants, any amount claimed from a tenant goes through an invoice.

These invoices can be sent or not depending on their type:

How to generate invoices in batches?

The calls for rent are generated automatically by the system at each due date. So you have nothing to do.

However, it may occur that you want to prematurely issue a bill, for example, if you bring in a tenant who only arrives in a month and you want to show him his first call for rent.

In this case, select the tenancy for this tenant from the list of tenancies.

Go to the "Invoicing" tab and click on the button. Generate invoices

You are then redirected to the bill which you can print or send directly to the tenant.

To generate invoice in batches, you must select the tenancies to be invoiced in the list view, then click the "Action" button and finally “Generate invoices”. This functionality is only available in developer mode because it should, in principle, never be used.

You can consult the selected tenancies and here the invoices have been generated.

How to generate invoices from the tenancy?

The system has a scheduled task that generates tenancy invoices respecting the invoicing type.

If the beginning of the month arrives then an invoice will be added to the "open invoices".

You can view all invoices from the Invoices button (for this example the system has already generated invoices and are not in open state).

In the tenancy view, the "Provisions" tab shows you the details of the provisions paid as well as the charges to be rebilled:

When you click on the "validate" button, it is automatically generated.

He deducts the amount payable from the provisions paid.

If it is a closing statement, it deducts:

Do not forget to validate the charge statement generated and send it to your tenant!

What is rent indexation?

Each year, on the anniversary date of the tenancy enactment, the rent may be adjusted to the cost of living. Until December 1993, indexation was still based on fluctuations in the consumer price index. Since 1994, the health index has been used.

The formula for calculating the new rent:

The formula for calculating the indexed rent is as follows: New Rent = Base Rent Price * Last index / starting index

How to determine the basic rent?

Determination of the basic rent for tenancies that came into force after January 1, 1984:

In the case of a tenancy that started after January 1, 1984, the basic rent is the amount of the rent corresponding to the most recent of the following three events:

It does not take into account rental costs and charges left to the tenant by the tenancy.

Determination of the base rent for tenancies entered into force before January 1, 1984:

In this case (tenancy having started before January 1, 1984), the basic rent corresponds to:

How to determine the starting index?

The starting index is that of the month preceding the month during which the tenancy contract was signed.

How to determine the new index?

The "new index" is the health index for the month preceding that of the anniversary of the entry into force of the contract. You can find the value of the indices on this link.

What do the index bases correspond to?

There are several index basis: the 1988 index base, the 1996 index database, the 2004 index base and the 2013 index base. Each given month has a different index in each base. Here, for example, the values of the health indexes for March 2014 for each of the basis are as follows:

Which index base to use?

The calculation of indexation of rents relating to tenancies concluded before February 1, 1994 must be done in the base 1988 = 100.

For other tenancies, it doesn't matter, the important thing is that the same base is used for the base index and for the new index as shown in the example below.

Example: A rent must be indexed on November 1, 2012. The tenancy started a year earlier with a rent of 100.

The rent for the current month is calculated prorata temporis

How to calculate the indexation?

How to index a tenancy?

As soon as the signature date is entered, the system automatically returns the value of the starting index, so after entering the rent price the values of “Base rent price” and “Current rental price” will be set up to date.
And on the anniversary of the tenancy the button 'Apply the current index ' appears and does not disappear until you click on it. 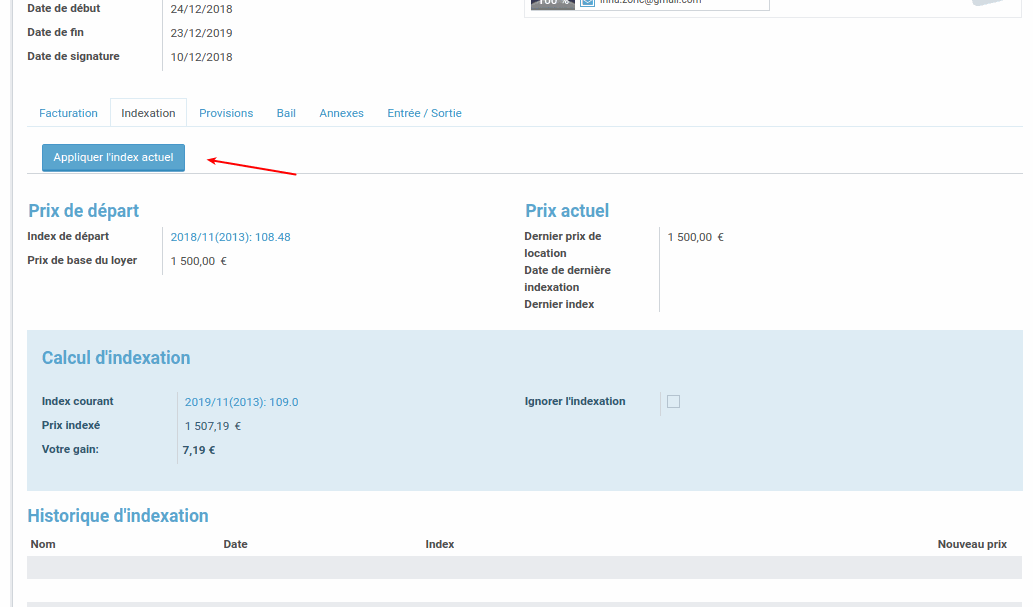 The system automatically generates an email proposal to send to the tenant and a price difference invoice if the call for rent for the current month has already been generated. 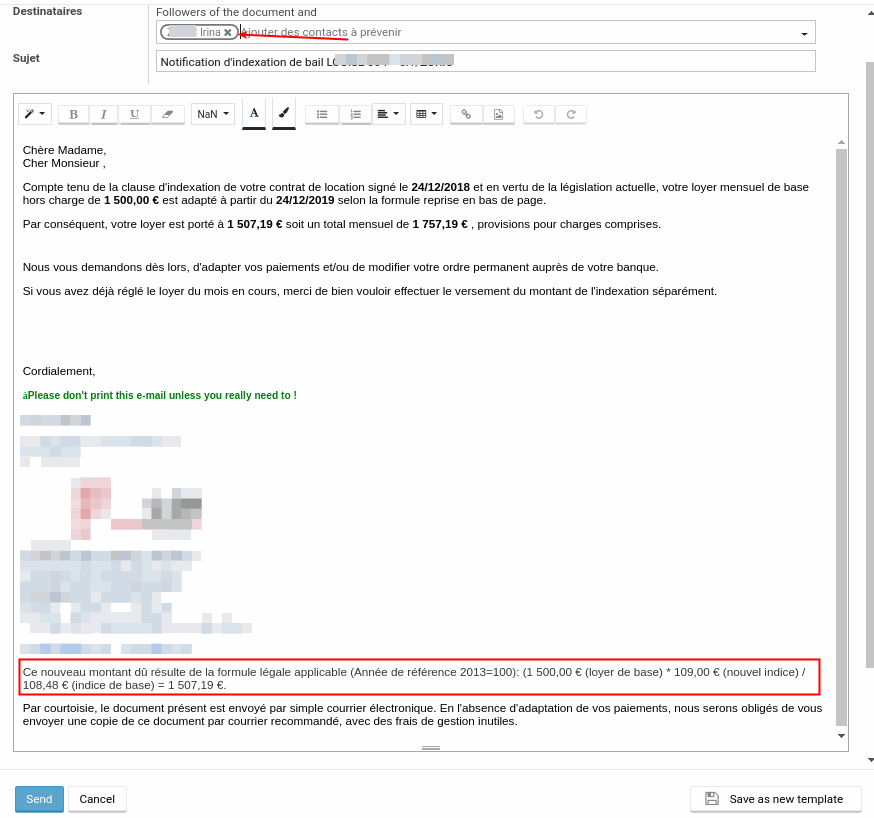 After sending the email notification to the tenant, the system updates the tenancy index.

How to index tenancies in batches?

and you can choose if you will notify the tenants by email following this change or not.

How to automate and plan the follow-up of customer payments?

Follow up levels refer to the due date; if no payment condition is specified, the due date will be equal to the date of issue of the invoice.

For each level, you must define the number of days and create a note which will be automatically added to the followup letter.

The "Process follow-up" button allows you to send an email to the tenant and print a follow-up report in pdf: 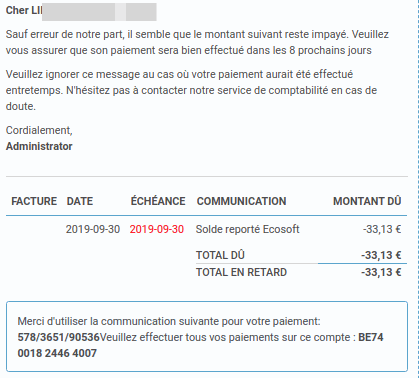 After sending the 1st follow up, the system updated sending the 2nd follow up after 15 days as you configured. 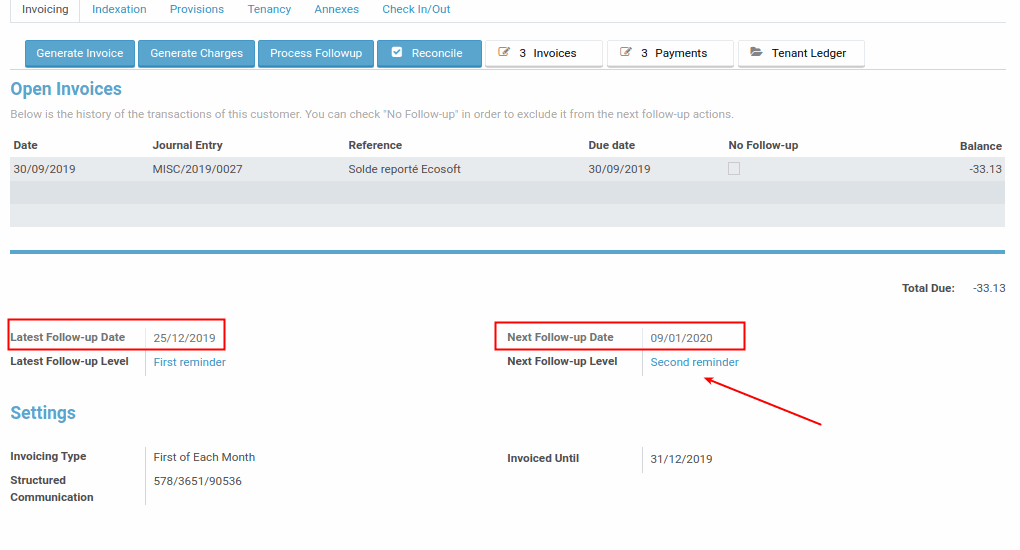